Publish content to your screens directly from Microsoft Teams

Best Media Player Options for Digital Signage on a Budget

Not sure which media player will be best (and cheapest) for your digital signage display? This guide has everything you need to know...

A digital signage change is in the air. No longer is it restricted just to big companies, with huge IT infrastructures. The rise of cloud-based signage systems (such as ScreenCloud) is changing the market, meaning that with a TV, some consumer-grade hardware such as one of the media players below, and an app, you could get an impressive looking digital signage display up and running.

Here’s an impressive statistic. Most digital signage methods and systems cost an average of $2,320 per unit. That’s based on the combination of everything you would traditionally need to get set up: a screen, a commercial-grade media player, installation costs, project management, and so on.

When you add ScreenCloud to a screen and one of the consumer-grade media players below, you’re looking at an overall cost of around $400–450. That's a mega saving that could be better allocated to your business elsewhere.

Cloud-based signage systems such as ScreenCloud don’t require much to get going. If you’re looking to get a digital signage solution setup on a budget, any TV, or a media player from the list below and ScreenCloud will have you covered.

You can also watch our Head of Hardware, Abner, talk you through the best low cost media devices for signage in his Unboxed video below:

Otherwise, let's walk you through the top budget media devices for digital signage, ranging from $50 - $150.

Amazon's Fire TV Stick 4K and Amazon Fire TV Stick 4K Max are clever little devices that plug into the HDMI port of your television, in order to turn it into a smart screen display. Once plugged in and set up your TV is able to give you access to the Amazon App Store (which includes our ScreenCloud app) as well as a host of other options.

The Amazon Fire TV Stick 4K Max is undoubtedly the cheapest commercial-grade media player you can buy. Benefits include a super simple setup and a responsive interface. The Fire TV Stick makes digital signage quick and easy to set up. If you’re interested in the tech side, then it also has a dual-core processor, a dedicated VideoCore4 GPU, and 8GB of storage which is enough to use ScreenCloud’s caching feature for images, video, and webpages.

Now to consider the different variations. As you'll see when you go to purchase an Amazon Fire TV Stick there are four main options:

We advise only getting the Amazon Fire TV Stick 4K Max or Fire TV Stick 4K for digital signage applications. Screen mirroring, which was available with the earlier iterations, is not supported by the 4K stick. The screen mirroring feature in the newest Fire TV Stick 4K has actually been completely removed by Amazon. If you consider that to be a crucial feature, we advise choosing Chromecast with Google TV as a substitute.

Lastly, if the Amazon Fire TV Stick 4K/Max is not available in your region, then the Chromecast with Google TV should be fine.

Lastly, if the 4K Fire Stick isn't available in your region, then the Chromecast with Google TV should be fine.

Best for: creating cheap, digital signage displays
Average cost: For $49.99 to $54.99 you can have it here by the weekend
Order link: Get it from your local Amazon store online

If the Amazon Fire TV Stick 4K Max is not available in your region or if you would like to have screen mirroring options, the Chromecast with Google TV is a perfectly good alternative, as it costs $49.99 as well.

The Google Chromecast released in late 2020 is a significant upgrade in usability compared to the previous Chromecast in that it now comes with a full user interface powered by Google TV.

Like previous Chromecasts you can still cast to your screen using a variety of apps. But with the new Chromecast with Google TV, it now comes with a full operating system and remote control

Google TV made its first debut on the Chromecast with Google TV.

Order link: Get it from the Google Store 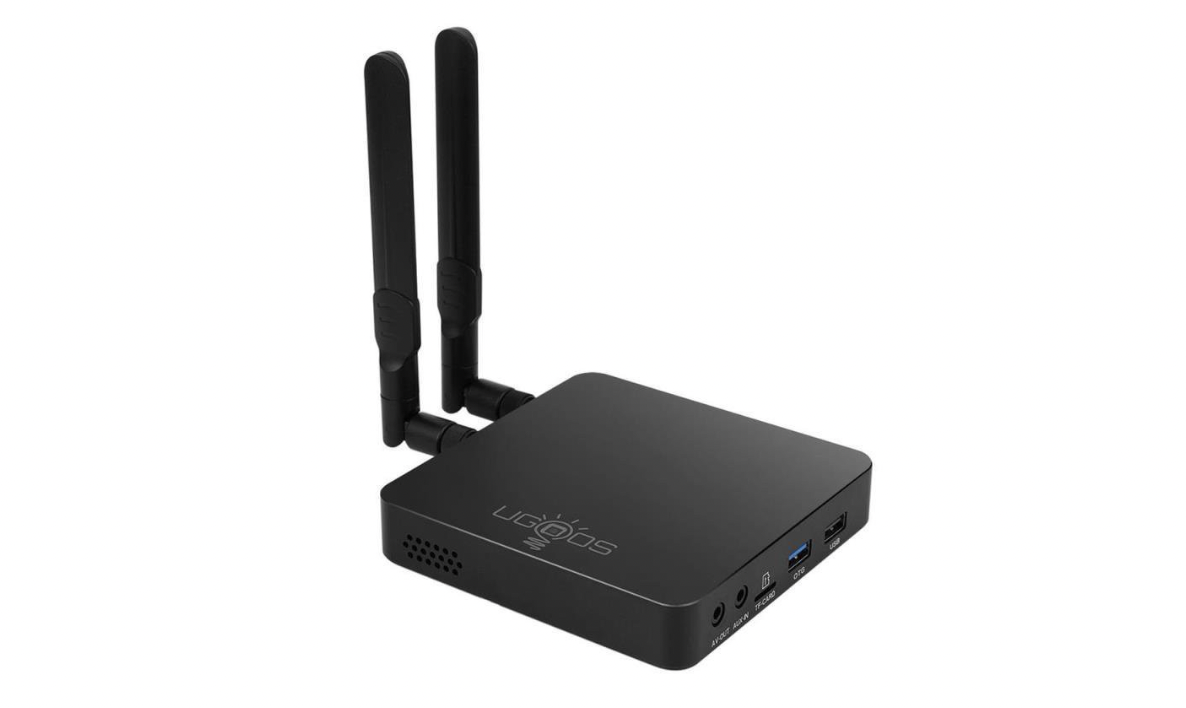 If you only need to set up a few Digital Signage screens in your store or office, low-cost media players like the Fire TV Sticks and Chromecast with Google TV are great options. However, if you want more business-ready devices with extra control features, you're better off choosing an Android-powered business device like the Ugoos AM6B Plus.

The Ugoos AM6B Plus is a robust industrial PC running Android that is powerful and intended for business use cases like digital signage. The Ugoos AM6B Plus runs a more complete version of Android than Amazon or Android TV devices, similar to what you'd find on a phone or tablet that supports more business apps and services like remote device management options.

The Ugoos AM6B Plus is equipped with an Amlogic S922J SoC, 4G of DDR4 RAM, and 16GB of internal storage. This box has the latest High-Efficiency Video Coding, which is usually called HEVC or H.265, and runs on the Android 9.0 operating system. This next level video processor allows for 4K videos to be easily compressed and streamed to your display without compromising any picture quality. And it looks great!

The AM6 is enclosed in an aluminum chassis, this not only gives the box a sleek and professional look but its build dissipates heat, protects it, and provides stable processing for a kind of task.

Best for: demanding content and signage solutions with an even higher budget, more professional features 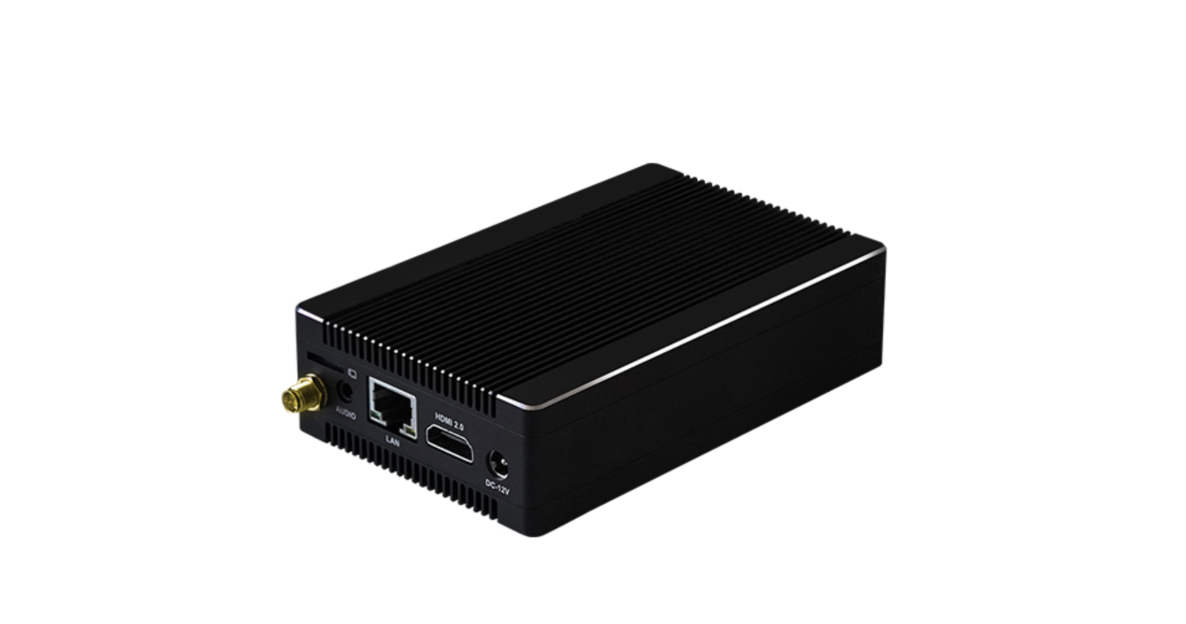 Our first ScreenCloud OS device, the Station P1 Pro, is a custom Linux-based platform designed to provide the best digital signage experience with ScreenCloud. Unlike other operating systems, when you turn on a device powered by ScreenCloud OS, it boots up and just runs ScreenCloud. It has large scale deployment capabilities - Simply connect the ScreenCloud OS device to your internet and screen, provision it in a few short steps and you’ll be up and running with ScreenCloud. Additionally, it has minimized the security risk inherent to its singular, purpose-built nature. Therefore, it has a better-protected network with fewer exposure nodes for potential hacking.

Commercial grade media players, like the ScreenCloud OS device, come equipped with a metal chassis to protect the device and dissipate heat. They are built to last for extended periods and can handle playing demanding content thanks to their 6 core CPU, 4 core GPU, and 4GB of RAM.

The main advantage of the ScreenCloud OS is easy deployment and an available remote device management console (for pro plan members). ScreenCloud OS uses the process of loading device configuration onto a USB flash drive, making the rollout of large fleets of digital signage devices that much easier and faster. Likewise, you can also use the remote device management console to manage your fleet, observe the health of all your devices, change network settings without the need to re-provision using a USB flash drive, and much more.

Best for: Commercial environments that require a device to be on 24/7, more professional features like remote device management.

Order link: Click here to order from the ScreenCloud Store, or get in touch with our sales team here!

Get started with a low cost digital signage solution today

If you need help selecting the right digital signage device for your screen network, check out the comprehensive buyer's guide to buying digital signage hardware, or you can always reach out to our friendly team (we have a whole Hardware department, figures right?) on support@screencloud.com.

For a free trial of ScreenCloud that will work on your budget media device head over to ScreenCloud - we can’t wait to see you.

Ready to get your organization connected?

Connect your first screen today with our 14-day free trial